The Policy Statement made by H.E. the President at the inauguration of the first Session of the ninth Parliament 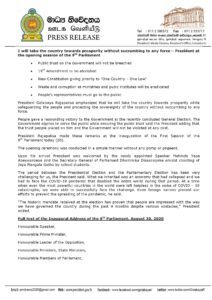 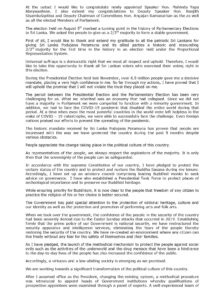 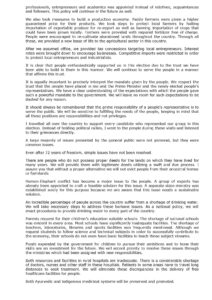 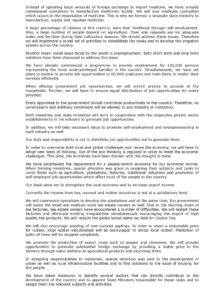 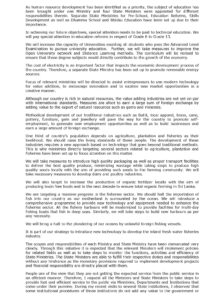 State Minister of Regional Co-operation Tharaka Balasuriya assumed duties at the Foreign Ministry today (19 August). The State Minister was received by Foreign Secretary Admiral (Prof.) Jayanath Colombage and other senior officials, upon his arrival at the Ministry. Religious observances were conducted to invoke blessings prior to the assumption of duties.

State Minister Balasuriya, addressing the gathering of senior officials and staff of the Ministry, following the assumption of duties, END_OF_DOCUMENT_TOKEN_TO_BE_REPLACED

Minister Gunawardena was received by Foreign Secretary Admiral Prof. Jayanath Colombage and other senior officials upon his arrival at the Ministry. Following multi-religious observances, the Minister officially assumed duties.

Later, addressing the staff, the Foreign Minister remarked that the Government is ready to rise up to the new challenges with the mandate given by the people of Sri Lanka. END_OF_DOCUMENT_TOKEN_TO_BE_REPLACED

Admiral Prof. Jayanath Colombage (PhD) assumed duties as the Secretary to the Foreign Ministry today (14 August) following the appointment to the position by President Gotabaya Rajapaksa.

The new Foreign Secretary Admiral Colombage was warmly received by the senior officials of the Foreign Ministry this morning, upon arrival at the Ministry.

Admiral Colombage was previously Additional Secretary to H.E the President for Foreign Relations since December 2019. END_OF_DOCUMENT_TOKEN_TO_BE_REPLACED

Hon. Mahinda Rajapaksa was sworn in as the 13th Prime Minister of Sri Lanka

The swearing in ceremony took place at the historic Kelani Raja Maha Viharaya this morning (9).

Elected to the post for the fourth time, Mr. Rajapaksa served two terms as the Executive President of the country from 2005 to 2015.

44th Session of the Human Rights Council Agenda Item 2: Interactive dialogue on the annual report of the High Commissioner 02 July 2020

44th Session of the Human Rights Council Agenda Item 2: Interactive dialogue on the annual report of the High Commissioner 02 July 2020