President addresses the General Debate of the 76th Session of the General Assembly of the UN (New York, 21-27 September 2021)

Statement by H.E. Gotabaya Rajapaksa, President of the Democratic Socialist Republic of Sri Lanka at the General Debate of the Seventy-Sixth Session of the United Nations General Assembly 22 September 2021

I am honoured to represent Sri Lanka at this august gathering today.

Let me first congratulate His Excellency Abdulla Shahid on being elected President of the 76th session of the General Assembly.

Mr. President, you have long been a friend of Sri Lanka. We look forward to working closely with you in the year ahead.

I also take this opportunity to convey our appreciation of His Excellency Volkan Bozkir’s stewardship of the previous session of the General Assembly, and to commend Secretary-General Antonio Guterres for his leadership in these difficult times.

The COVID19 pandemic has had a devastating impact on humanity.

I sympathise deeply with all who have lost their loved ones during the pandemic.

I thank frontline healthcare and essential workers around the world for their dedication and commend the World Health Organisation for its crisis response.

I also greatly appreciate the rapid advances made by the scientific and medical communities in devising vaccines and treatment protocols to combat the virus.

At the same time, we must recognise that the challenges surrounding production, distribution, deployment and acceptance of vaccines must be overcome urgently if the spread of dangerous new virus strains is to be prevented.

Ensuring that everyone, everywhere, is vaccinated is the best way out of the pandemic.

Although still a developing nation, Sri Lanka has been very successful in its vaccination programme. We have already fully vaccinated nearly all those above the age of 30.  Everyone over the age of 20 will be fully vaccinated by the end of October. We will start vaccinating children over 15 years of age in the near future.

The rapid progress of vaccinations was enabled by coordinated efforts between healthcare workers, Armed Forces and Police personnel, Government servants, and elected officials.

In collaboration with the WHO, Sri Lanka is establishing a Regional Knowledge Hub to facilitate exchange of lessons learnt from COVID19 and support countries to recover better.

Sri Lanka also benefitted greatly from financial and material support provided by bilateral and multilateral donors to manage the pandemic. I thank these nations and institutions for their generosity. The increased global cooperation visible during this ongoing crisis is greatly encouraging. However, there is still more to be done.

The economic impact of the pandemic has been especially severe on developing countries.
This has placed the implementation of the 2030 Agenda for Sustainable Development Goals at considerable risk.

It is vital that more initiatives including development financing and debt relief be adopted through international mechanisms to support developing nations and help them emerge from this uncertain situation.

Sri Lanka too has suffered greatly due to the pandemic. In addition to the tragic loss of life, our economy has been deeply affected.

The lockdowns, together with general movement restrictions, reduced international travel, and slower global growth have affected nearly all sectors of our economy.

Tourism, one of Sri Lanka’s highest foreign exchange earners and a sector that supports nearly 14% of the population, has been devastated.

This industry, together with small and medium businesses in many other sectors, received Government support through interest moratoriums and other financial sector interventions.

Daily wage earners and low-income groups were also supported through grants of cash and dry rations during lockdowns, adding significantly to state expenditure.

In addition to their immediate impact, these economic repercussions of the pandemic have limited the fiscal space available to implement our development programmes.

As devastating as the consequences of the pandemic have been to humanity, the world faces the even greater challenge of climate change in the decades to come.

As emphasised in the recent report by the Inter-governmental Panel on Climate Change, the unprecedented effect of human activity on the health of the planet is deeply worrying.

Addressing the grave threats posed by climate change and the loss of biodiversity requires decisive and urgent multilateral action.

As a climate-vulnerable country, Sri Lanka is deeply aware of the dangers of climate change.

It is in these contexts that Sri Lanka is a Commonwealth Blue Charter Champion and leads the Action Group on Mangrove Restoration.

Through the adoption of the Colombo Declaration on Sustainable Nitrogen Management, which seeks to halve nitrogen waste by 2030, Sri Lanka has also contributed to global efforts to reduce environmental pollution.

Having participated virtually in the Pre-Summit held in April, I trust that the United Nations Food Summit later this month will result in actionable outcomes to promote healthier, more sustainable, and equitable food systems globally.

Such outcomes will be crucial to human health as well as to the health of our planet.

Sustainability is a cornerstone of Sri Lanka’s national policy framework. Because of its impact on soil fertility, biodiversity, waterways and health, my Government banned the use of chemical fertilisers, pesticides, and weedicides earlier this year. Production and adoption of organic fertiliser, as well as investments into organic agriculture, are being incentivised.

I appreciate the encouragement received from many global institutions and nations for our efforts to create a more sustainable agriculture in Sri Lanka.

The conservation of our environment is one of our key national priorities.

We aim to increase forest cover significantly in the coming decades. We are also working to clean and restore over 100 rivers countrywide, and to combat river and maritime pollution. We have also banned single use plastics to support ecological conservation.

Sri Lanka recognises the urgent need to reduce use of fossil fuels and support decarbonisation.  Our energy policy seeks to increase the contribution of renewable sources such as solar, wind and hydropower to 70% of our national energy needs by 2030.

Sri Lanka welcomes the support of the international community as it engages in the task of reviving its economy and carrying out its national development programme. We intend to make full use of geostrategic location and our robust institutions, strong social infrastructure, and skilled workforce, to attract investment and broaden trade relationships.

My Government is focusing on extensive legal, regulatory, administrative and educational reforms to facilitate this, and to deliver prosperity to all our people.

The democratic tradition is an integral part of our way of life.

My election in 2019 and the Parliamentary election in 2020 saw Sri Lankan voters grant an emphatic mandate to my Government to build a prosperous and stable country, and uphold national security and sovereignty.

In 2019, Sri Lanka experienced the devastation wrought by extremist religious terrorists in the Easter Sunday attacks. Before that, until 2009, it had suffered from a separatist terrorist war for 30 years. Terrorism is a global challenge that requires international cooperation, especially on matters such as intelligence sharing, if it is to be overcome. Violence robbed Sri Lanka of thousands of lives and decades of prosperity in the past half century.

My Government is committed to ensuring that such violence never takes place in Sri Lanka again.

We are therefore acting to address the core issues behind it.

So too is ensuring more equitable participation in the fruits of economic development.

It is my Government’s firm intention to build a prosperous, stable and secure future for all Sri Lankans, regardless of ethnicity, religion, or gender.

We are ready to engage with all domestic stakeholders, and to obtain the support of our international partners and the United Nations, in this process.

However, history has shown that lasting results can only be achieved through home-grown institutions reflecting the aspirations of the people.

Sri Lanka’s Parliament, Judiciary and its range of independent statutory bodies should have unrestricted scope to exercise their functions and responsibilities.

If, in keeping with the theme of our General Debate today, we are to truly build resilience through hope, we must all strive towards the common good.

It is the role of the United Nations to facilitate this by treating all sovereign states, irrespective of size or strength, equitably, and with due respect for their institutions and their heritage.

I request the United Nations and the international community to ensure the protection of the Buddhist heritage of Afghanistan.

I call on the member states of this august Assembly to work together in a spirit of true cooperation, generosity, goodwill, and mutual respect to foster a better and more sustainable future for all humanity. 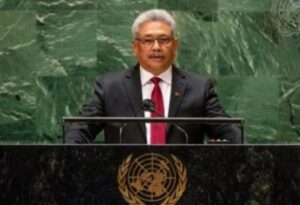