On the eight of January last year, in a historic election the Sri Lankan people voted for democracy, reconciliation and development, the three pillars on which the government is taking the country forward today. They chose robust democratic institutions over kleptocracy and authoritarianism, they chose healing and unity over hate and division and they chose a development strategy based on free competition and a level playing field over a system of crony capitalism.

As a result, Sri Lanka, the oldest democracy in Asia, which has faced two Marxist insurgencies, a civil war and nearly a decade of self-imposed international isolation, is now on the verge of a renaissance. The new government has a clear mandate and is putting in place the foundations for political and policy stability, growth and development, in addition to regaining Sri Lanka’s role at the centre stage of international affairs. 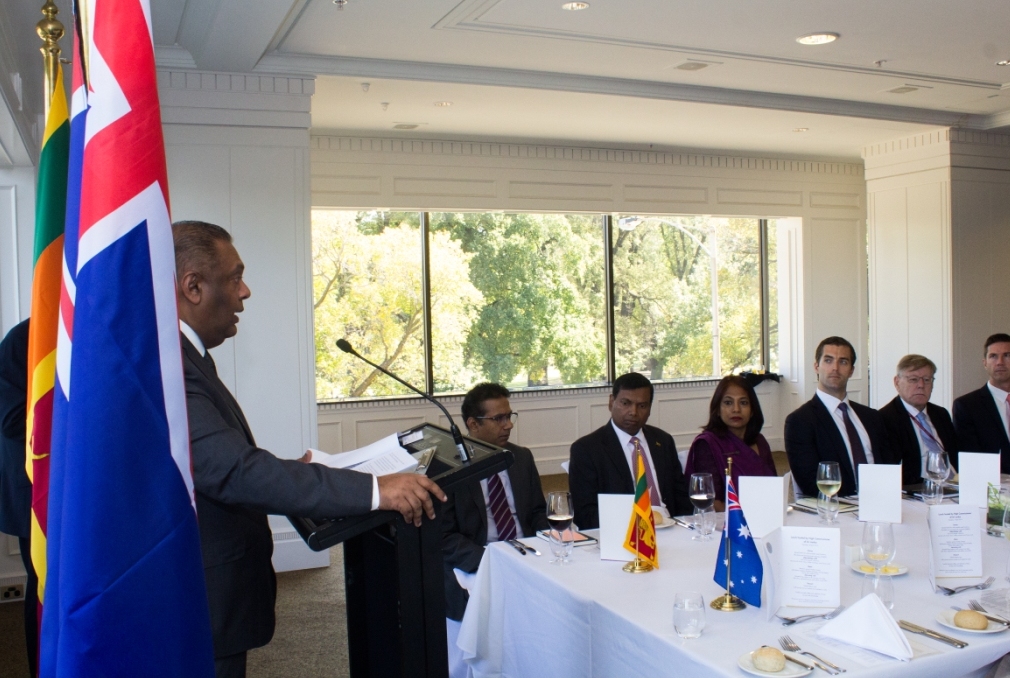 The government has already significantly strengthened the separation of powers and checks and balances. Within months of coming to office, the government passed a constitutional amendment that limited the powers of the presidency and strengthened the independence of the judiciary, bribery commission and other key public bodies. It also took immediate steps to end censorship and allow a completely free media. And I can assure that the Fourth Estate is more than active in holding the government to account. The government is also committed to ensuring that Sri Lanka’s democracy isn’t reduced to ballotocracy: we are strengthening the deliberative and participatory aspects of democracy. For example, parliament recently approved a 25 percent quota for women at local government level and a Right to Information Bill has been tabled in parliament.

In fact, tomorrow, Parliament will be convening for the first time Constitutional Assembly in order to start the process of designing Sri Lanka’s third republican constitution that will further strengthen parliament, the courts and independent bodies and reduce the centralization of power in the presidency.

The new constitution is also one of three main prongs of the Government’s reconciliation strategy. For it is our failure as a country to accept and celebrate our diversity and address the justifiable grievances of our different communities that caused the ethnic conflict and war. In fact, if not for this, Sri Lanka would have most likely fulfilled the destiny that we predicted in a London newspaper on the day of her independence, nearly seventy years ago, and become the “Switzerland of the East”. The new constitution will ensure that power is shared so that citizens are empowered to be involved and have a greater say in the decisions that affect their lives and help ensure that the country is truly united.

The second prong is coming to terms and dealing with our past. We know that if we are to move forward this is necessary, so Sri Lanka co-sponsored a resolution in Geneva that outlines a four pillar approach based on truth, accountability, reparations and non-recurrence. Consultations on the design of the Missing Persons Office, TRC, Accountability Mechanism and Office of Reparations are currently underway.

Third, we are addressing the plethora of issues that remain in the conflict affected areas of the island. One of the first steps the government took was the restoration civilian administration in the North and East, the government has released over 3400 acres of land and we are working hard to improve living standards.

But in addition to domestic political stability, the government is also helping ensure stability in the region. We have re-balanced our foreign policy so that we now have excellent ties with our neighbour India, in addition to our traditional friends such as China, the US, EU and Japan. After several years we’ve had Joint Commissions with India and the EU. Sri Lanka and the US formalized their partnership for the first time in the form of the Partnership Dialogue that Secretary Kerry and I initiated in February this year. Our relations with China remain strong and I am in fact going from Sydney to Beijing to join Prime Minister Wickremesinghe who is paying an official visit to China.

We are in the process of collaborating with our partners, including Australia, in countering violent extremism, securing Sri Lanka’s vast maritime area which is nearly five times that size of its landmass and protecting Indian Ocean shipping routes from piracy.

Sri Lanka looks forward to working closely with Australia to ensure the maritime security of the Indian Ocean as both parties are committed to ensuring freedom of navigation and a rules-based international order. We also need to work together on issues of climate change that is already seriously affecting our environments and economies. Our relations with Aussie remain cordial and as strong as ever, and I hope that my bilateral discussions with Foreign Minister Julie Bishop tomorrow will form the basis for increasing the depth and breadth of our relationship in the coming years.

For the first time since Independence there is tremendous hope that this vision for a democratic, truly united, peaceful and prosperous country can be achieved. This is because the two main political parties that have opposed each other from independence have joined together, for the first time in history, in a grand coalition so that they can collectively address these long-standing issues once and for all.

In fact, the recent unanimous decision to make Parliament a Constitutional Assembly, which which starts work tomorrow, and the approval of the budget last December with the largest majority any government has ever achieved, shows that this government is more stable than any other government since independence – despite the infantile and opportunistic machinations of a small faction of the opposition comprised of bankrupt politicians.

As a result, the coming years will not only see political stability but macro-policy stability as well, despite the usual day-to-day complexities of coalition government. The government is committed to achieving its promises for growth and employment. The only way we can do this is by ensuring macro-economic stability, increased market access and an improved investor climate.

The government is currently negotiating with the IMF for a stand-by facility and our economy has proved its macro-economic resilience. Over the last five years average GDP growth exceeded 6 percent, inflation never exceeded 7.5 percent and the government is now putting in place a framework with the IMF for fiscal and external sector consolidation that will put the Sri Lankan economy on a firm foundation for growth.

We are leveraging Sri Lanka’s unique geo-economic position at the centre of the emerging world – located in the Middle of the Indian Ocean, next to the main East-West Sea Route and at the mouth of the Indian Sub-Continent – by improving market access for Sri Lankan goods and services in the Indian and Pakistani markets. We are building on existing free trade agreements with India and Pakistan and we in negotiations to sign a free trade agreement with China. As a result in addition to excellent connectivity to the emerging world, Sri Lanka will have deep concessionary access to the largest emerging markets. We are also regaining access to lost markets, such as the EU, by improving our human record which will help us regain GSP+ concessions.

However, if Sri Lanka is to kick-start her economy FDI is essential and we are making Sri Lanka an investor’s paradise as well. We are working hard to cut-red tape, ensure investor security and improve Sri Lanka’s infrastructure, which is already the best in the region. We are reforming our tax system which is holding back our rank on the Doing Business Index, where we are already ranked the easiest place to do business in South Asia. But while we are located in South Asia, we are benchmarking ourselves against South East Asia. We are also streamlining the investment process with a one-stop investment shop in the form of the Agency for Development, which will also have significant private sector involvement. We have excellent ports, airports and roadways, in fact Colombo Port is the busiest in South Asia.

Sri Lanka is open to the world and open to foreign investment. We particularly need considerable investment in tertiary education – including vocational education, ocean industries and our diary sector. Our Ambassador in Australia, who has already done so much for Sri Lanka Australia relations through his yeoman service at Sri Lanka’s cricket board, and our two consul-generals, in Melbourne and in Sydney, will provide you any assistance you may require in exploring Sri Lanka. As for existing investors, I want to thank you for your confidence in Sri Lanka and I assure you that my ministry and the government are committed to partnering with you to make business easier and safer. 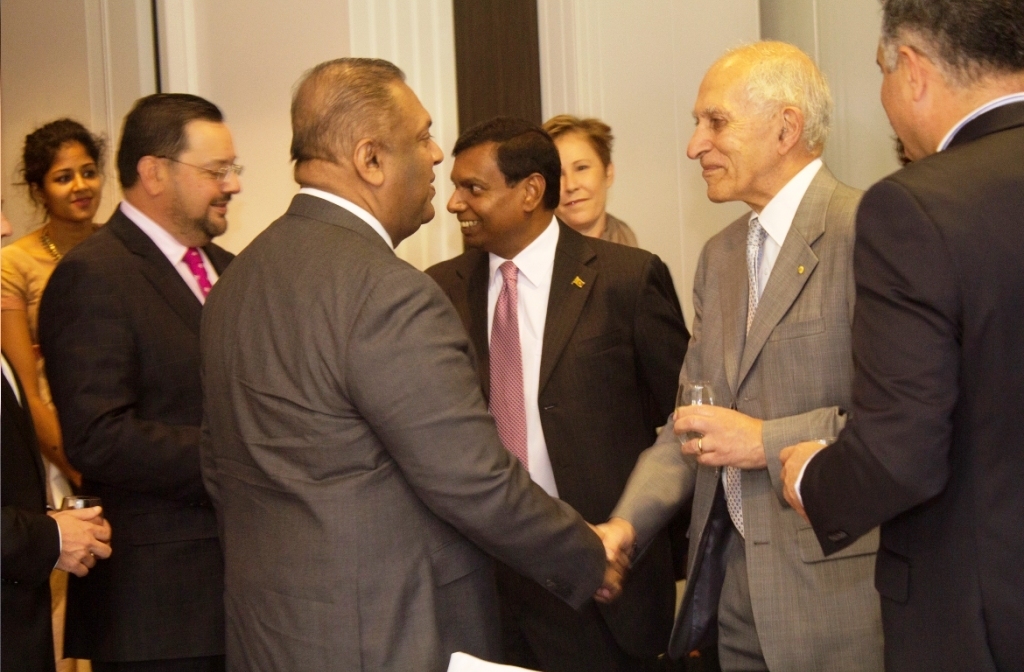 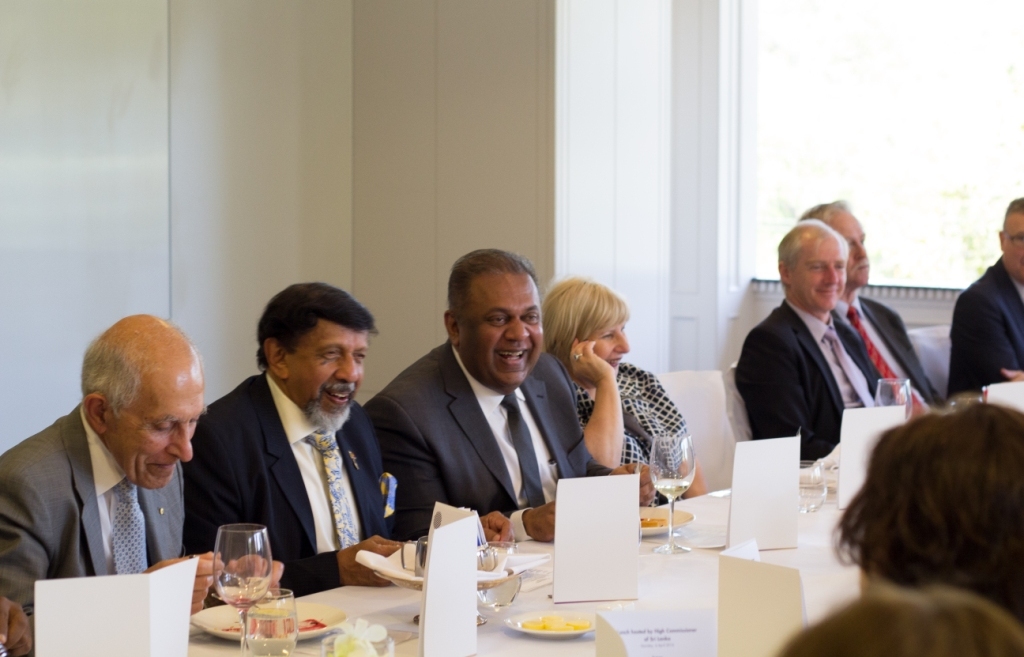