The Ocean Affairs, Environment & Climate Change Division of the Foreign Ministry, together with the High Commission of Australia to Sri Lanka and the Maldives, held a multi-stakeholder meeting recently, to discuss international best practices, application of Systems Engineering model to work on the vision, mission and needs of Sri Lanka to establish a holistic and state-of-the-art Maritime Safety Authority. END_OF_DOCUMENT_TOKEN_TO_BE_REPLACED 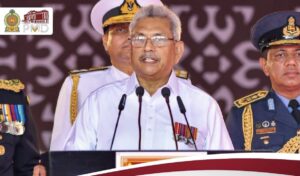 END_OF_DOCUMENT_TOKEN_TO_BE_REPLACED

In Sinhala,   In Tamil,  In English

In Sinhala,   In Tamil,  In English

Sri Lanka High Commission in Canberra, Australia, celebrates the 74th Anniversary of the Independence Day of Sri Lanka on 04 February 2022

END_OF_DOCUMENT_TOKEN_TO_BE_REPLACED

Foreign Minister Prof. G.L. Peiris hosted a Lunch on 20 January, 2022 in honour of the visiting Korean Delegation headed by the Speaker of the National Assembly of the Republic of Korea, Park Byeong-Seug.

During the lunch, the two sides held detailed discussions on ways and means to further enhance bilateral cooperation between Korea and Sri Lanka.  Extending the Government’s deep appreciation to the Korean Government for the enormous support extended so far with Korea’s proven technologies in construction, power generation and communications, the Foreign Minister Prof. G.L. Peiris invited for aggressive investments, more employment opportunities and technical cooperation by Korean authorities. Minister Peiris recalled that, during a previous period, there was a special investment zone in Sri Lanka for Korean entrepreneurs and emphasized that it would be timely to consider reviving this initiative, and expressed resolve to work towards it.

In his talks, the Korean Speaker reiterated Korean Government’s commitment to further deepen already buoyant bilateral relations between the two countries. He underscored the stratagem of the Korean transformation from one of the poorest country into an economic giant in the region in the span of a century, and, in this context, mentioned Sri Lanka too can adopt the growth model of Korea to expand and develop Sri Lanka’s economy into a major maritime hub in the Indian Ocean.

The Speaker of the National Assembly of the Republic of Korea and the accompanying delegation is undertaking an official visit to Sri Lanka from 19 to 21 January 2021. The invitation to Korean Speaker to visit Sri Lanka was extended by Foreign Minister Prof. G.L. Peiris who had visited Korea in early January 2022.

The two Ministers had productive discussions on a multitude of areas of bilateral interest. Minister Peiris noted with appreciation Hungary’s empathetic approach towards Sri Lanka in addressing residual issues of reconciliation, and apprised the Hungarian Minister on progress in reconciliation and the credible domestic framework in process to promote and protect human rights, in keeping with the country’s international obligations. Minister Peiris also noted that Hungary is a member of the European Union (EU), with which Sri Lanka maintains an important and abiding partnership.

The two Ministers highlighted the importance of broadening and deepening economic relations, including the promotion of trade, investment and tourism ties in the current global context.  Towards this end, the two Ministers agreed to convene the second session of the Sri Lanka-Hungary Joint Commission on Economic Cooperation (JCEC) at an early date this year. Minister Peiris referred to the need to optimize utilisation of the EU GSP plus facility in accessing the Hungarian market, as Sri Lanka’s key exports benefit from duty free access to the EU market.  Interest was also expressed in the early conclusion of the Double Taxation Agreement between the two countries, as well as cooperation, inter alia, in science and technology, Ayruveda and renewable energy.

During the visit, Minister Szijjártó, who was accompanied by a substantive business delegation from Hungary, launched the Sri Lanka-Hungary Business Forum in partnership with the Minister of Trade Bandula Gunawardena, under the aegis of the National Chamber of Commerce of Sri Lanka.

Noting that development cooperation comprises an important element of the bilateral partnership, Minister Peiris conveyed Sri Lanka’s appreciation to Hungary for providing infrastructure development assistance to Sri Lanka through a soft loan of Euro 52 million.  The current projects include the construction of flyovers at Kohuwala and Gatambe. At the invitation of the Minister of Highways Johnston Fernando, Minister Szijjártó visited the construction site of the Kohuwela flyover where the two Ministers laid the foundation stone for the project.

Another fruitful outcome of Minister Szijjártó’s visit was the signing of the Memorandum of Understanding between Sri Lanka and Hungary on Cooperation within the Framework of the Stipendium Hungaricum Programme for the Years 2022-2024. Under the programme, Hungary offers 20 scholarships annually to qualified Sri Lankan students to undertake undergraduate and postgraduate studies in a wide array of academic fields including engineering, sciences, economics and water management. Sri Lanka is the 86th country to benefit from the scholarship programme. Minister of Education Dinesh Gunawardena signed the MoU on behalf of the Government of Sri Lanka.

In the sphere of bilateral cooperation, the two Ministers agreed on the need to convene regular political consultations between the two Foreign Ministries to discuss issues of mutual interest.

In addressing the shared challenges posed by Covid-19, Minister Peiris acknowledged the support rendered by countries in Europe through the EU and bilaterally, such as Hungary, to enable vaccine equity globally.

State Minister of Regional Cooperation Tharaka Balasuriya, Foreign Secretary Admiral Prof. Jayanath Colombage and senior Foreign Ministry officials were associated with the bilateral meeting at the Foreign Ministry. Minister Szijjártó was accompanied to the meeting by Secretary of State for Trade Policy and Consumer Protection of the Hungarian Ministry of Innovation and Technology Péter Cseresnyés, MP, and other senior officials of the Hungarian Ministry of Foreign Affairs and Trade.

Speaker Byeong-Seng showed lively interest in the Parliamentary system under Sri Lanka’s Constitution, especially such features as the mingling of the Executive Presidential system with the framework of Cabinet Government.

Minister Prof. Peiris briefed the Korean Speaker about the current electoral system in Sri Lanka, and the reforms now under discussion by a Parliamentary Committee.

The Foreign Minister and the Speaker discussed in some detail the importance of the work of Select Committees, Consultative Committees and the Standing Committees outside the floor of Parliament, and the relationship of these Committees to the Party System.

The Speaker of the National Assembly of the Republic of Korea accepted with pleasure the invitation extended to him by Foreign Minister Peiris to visit the Parliament of Sri Lanka.

Dates were fixed in consultation with Speaker Mahinda Yapa Abeywardena. The Speaker of the ROK National Assembly will arrive in Sri Lanka on 18 January for a 3 day visit.

This visit will be a significant event in strengthening cooperation between the Parliaments of the two countries.

Foreign Minister Prof. G.L. Peiris highlighted the warm and special relationship and the multi-faceted nature of the partnership between Sri Lanka and China in his opening remarks at the bilateral meeting with the State Councillor and Minister of Foreign Affairs of the People’s Republic of China Wang Yi held at Temple Trees on 9 January, 2022.

Foreign Minister Wang Yi is on a brief official visit to Sri Lanka to launch the celebrations marking the 70th anniversary of the historic Rubber-Rice Pact and the 65th anniversary of establishment of diplomatic relations between Sri Lanka and China.

Speaking further Foreign Minister Peiris stated that whenever Sri Lanka faced difficulties, support was always forthcoming from China in the fullest measure. In this context, the Minister expressed sincere thanks and profound appreciation to Foreign Minister Wang Yi for China’s spontaneous and generous support in the national vaccination drive to combat the COVID-19 pandemic, including the donation of 3 million doses of vaccine. Moreover, the timely assistance from China during the current economic situation in the country by affording the facility of a US$ 1.5 billion currency swap with the Central Bank of Sri Lanka, has helped to boost the country’s currency reserves. This has further reinforced the abiding friendship and mutual trust between the two countries.

During the bilateral talks, other matters of bilateral interest were also discussed, including further support for the ongoing vaccination programme, attracting investments from China to the Colombo Port City and the Hambantota Industrial Zone, increasing tourism from China to Sri Lanka, enhancing Sri Lankan exports to China and promoting cultural cooperation, especially in fostering Buddhist ties between the two nations.

State Councillor and Foreign Minister of China warmly reciprocated the sentiments of his Sri Lankan counterpart and stated that China regards Sri Lanka as a time-tested friend and thanked Sri Lanka for the exceptional gesture in issuing a special commemorative coin last year to mark the centenary of the Communist Party of China. He hailed the Rubber-Rice Pact signed in 1952 as a historic landmark in bilateral relations. He also highlighted the strong and consistent support by both countries for each other  at various international fora over the years.

After the discussions, the two delegations signed the following Agreements, in the presence of Prime Minister Mahinda Rajapaksa and the two Foreign Ministers:

Minister Prof. Peiris paid tribute to the multi-faceted relationship which had developed between the two countries during their 44-year relationship, and its present robust character. END_OF_DOCUMENT_TOKEN_TO_BE_REPLACED

Minister Peiris referred to extensive economic cooperation between the two countries, especially Overseas Development Assistance led by KOICA and the EXIM Bank of ROK. Minister Peiris expressed appreciation of the benefits derived by Sri Lanka from these programmes.

Deputy Prime Minister Yoo Eun-hye, responding to Foreign Minister Peiris, said that the Government of ROK would consider extensive assistance for initiatives in the field of vocational education and training in Sri Lanka.